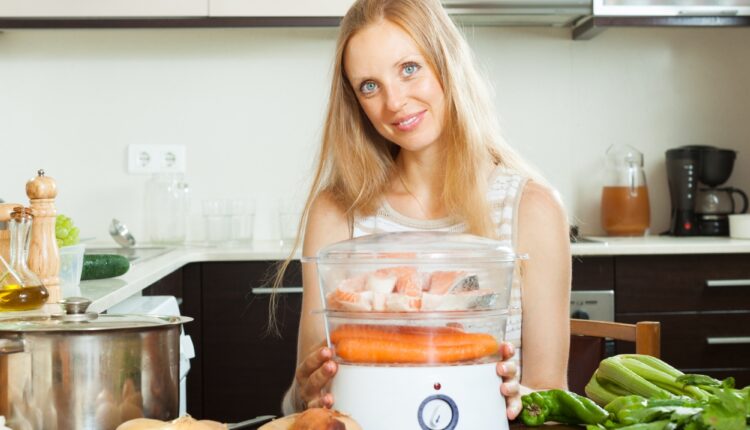 Cooking Steamer: A Guide To Cooking With A Steamer

Regarding cooking, using a steamer is one of the healthiest ways to prepare foods like fish, poultry, and vegetables. The food is prepared in a steamer by being cooked over boiling water. This method enables the chef to prepare meals with no added fat. And keep the naturally present nutrients in the food. Aluminum, stainless steel, or bamboo are some of the materials that may be used to construct steamers. Certain saucepans and stockpots have a steamer basket already attached to the pot’s lid. Bamboo steamers may have two, three, or even more trays that can be piled on top of one another and placed on top of a wok to steam food.

Steaming is the process that produces the most tender and flaky results when used to prepare filleted fish. The fish should be seasoned and placed in a single layer in the steaming basket. Place the basket over boiling water, making sure that the water level is lower than the bottom of the basket. About ten minutes will be needed to steam cook a fish fillet with a one-inch thickness. Thinner fillets will need less time to cook. When the fish flakes easily with a fork, it is ready to be served.

Before being steamed, the chicken should have the skeleton removed to reduce the cooking time. Steaming is an excellent cooking method for boneless chicken breasts. The chicken should be seasoned, then placed in the steaming basket. Steep the meat in the steam for anywhere from 10 to 25 minutes, depending on how thick it is. To test if the meat is cooked through, insert a thermometer into the thickest part of the cut; the reading on the thermometer should be 165 degrees Fahrenheit. In addition, little Cornish chickens may be cut in half and steamed; similar to other types of poultry, the hens should be cooked to an internal temperature of 165 degrees Fahrenheit.

Wooden steamers come with trays that may be stacked on top of one another, allowing for the simultaneous preparation of several different cuisines. Most food may be kept separate on the same tray thanks to the partitions often included with bamboo steamers. If you use more than one bamboo steamer tray, you should prepare the meal that needs the longest time on the bottom tray and then add the extra trays at the proper time. A good illustration of this would be cooking the fish on the bottom tray and adding vegetables such as green beans or asparagus five minutes before the fish is finished cooking.

In a steamer, the vegetables should be organized according to their respective cooking periods. In around five minutes, vegetables such as broccoli, cauliflower, asparagus, and green beans will reach the perfect texture of crisp tenderness. Cooking time for vegetables like carrots, cabbage, and maize may reach up to eight minutes. The cooking time for peas is the smallest at two minutes, while the cooking time for Brussels sprouts is the longest at ten minutes. You may make the cooking periods shorter or longer to suit your preferences, but take care not to overcook the veggies since they can quickly get mushy if cooked for too long.

The Steamer Basket Insert is used for steaming vegetables.

You will find that most steamer inserts, the sort you put in a pot, have legs that keep the steamer basket elevated above the steaming water.

They also come with a handle or a “loop” that you may use to remove the basket from the oven after the food has finished cooking. Remember that you will want easy access to that component to remove the insert when the time comes quickly.

Put a pot that’s either medium or big on one of the burners on your stove. Put your pot’s insert for the steamer into the pot. Add water and continue to stir the mixture until you see the water coming through the small holes. Turn the heat up high, then cover the saucepan with the lid.

In order to prevent the water from boiling over, reduce the heat to medium-low. Carefully put vegetables that have been washed and roughly sliced into the basket. Put the cover back on, and start the timer. Most vegetables need to be heated for around ten minutes, while others need longer or shorter times depending on the size of the chop. It is recommended to check the time after five minutes and then at intervals of two to three minutes. Make holes in the vegetables with a fork. Remove the saucepan from the heat after the food has reached the desired degree of tenderness.

you shouldn’t leave your veggies sitting in the pot over the boiling water since they will continue to cook even with the lid removed. Instead, gently remove the basket by using the handle while wearing heat-resistant gloves; alternatively, insert a sturdy fork through the “loop” and remove the basket while simultaneously using a heated mitt in the other hand to support the basket as it is lifted out of the oven.

It is highly recommended that the steamer basket be placed in the sink so that the hot water may drain from the basket and the vegetables. After the vegetables are somewhat cool, pour them into a big bowl.

How Does Diet Water Help With Weight Loss? Find Out What’s Good And Bad